This review was written by Kris Hampton and reposted from his site, powercompanyclimbing.com. Kris Hampton is our friend and the author of our 8-Week Endurance Training Program, which you should definitely check out if you’re wanting to send long routes! Here’s Kris – you’ve probably seen him at the Red…

By now you’ve seen it.  It’s unmistakable.  The Transgression hangboard (and it’s little brother, the Progression) is the first commercially available hangboard in some time to depart from the “little bit of every grip type” design.  As I’ve been talking up the benefits of training only on edges for a while now, I was instantly smitten with the design of the new board.  I had to get my hands on one.

I’d also heard that the board came with a training plan, one that went further down the path I’d taken my own training.  I’d never felt completely settled on a hangboard training plan, lost somewhere in the limbo of knowing that the classic “repeater” workout was far too many reps to really build strength (but great for power endurance) and believing that using smaller holds made more sense than using more weight.

Eva’s methods seemed to go much further down the “less reps” road than I was willing to travel, so I didn’t completely buy into the plan to begin with.  For the sake of this review, I decided to commit to it anyway, even though I was on the cusp of reaching a long term goal and was already toying with being my own training guinea pig. First things first.  Before I began the review, I’d heard several people lamenting the weight of the board (bad for shipping), the sharpness of the edges, and that in transit, the heavy boards were prone to damage.  This was true.  WAS.  You’ll notice that my board isn’t the swirly pattern typical of the original boards.

Because of the initial issues, JMClimbing changed the material used to manufacture the boards.  They are now made of a much lighter polyurethane (instead of polyester) that is unlikely to get damaged under normal shipping conditions.  Likely because of the new material, I found the edges to be downright friendly.  By the end of my cycle, I was hanging with 105 lbs. on the 18mm edge, with no worry about cutting into my fingers. If any of these problems kept you from seriously considering the Transgression board, then now is the time to take another look.  On to the review.

Board Dimensions:  Width:   23.5 inches Height:  16 inches Depth:   6 inches at it’s deepestWeight: 17.5 lbsPrice:  $265.00 plus shipping If you’re at all familiar with hangboarding, it’s easy to see why this board and it’s little brother are desirable.  Each board has a jug and 8 edges of decreasing size, with the Transgression being the more advanced of the two with edges of 18mm (about 3/4 inch), 14mm, 12mm, and 10 – 6 mm (less than 1/4″).  For the people who like to keep close track of numbers and tiny progressions, this thing is a godsend. The texture of the edges is a little gritty, so I sanded the flat side of the edges just slightly.  A quick pass over each just to make sure that no burrs were left from the manufacturing process.  Like I mentioned above, the edges themselves were friendly enough that they didn’t require any more sanding than the one pass (keep in mind that I feel that a light sand is mandatory for all climbing holds and boards).  The 18 mm edge never cut into me despite the extra load of 105 lbs.  The 6 mm edge I was using at the end of the cycle never cut me, and did no more than the absolute minimal skin damage that my 1/4 inch wood edge does. The edges are oriented in a descending order in such a way that it makes full crimping difficult.  If you ask me, this is a positive feature.  I wouldn’t recommend ever training finger strength in a full crimp position. 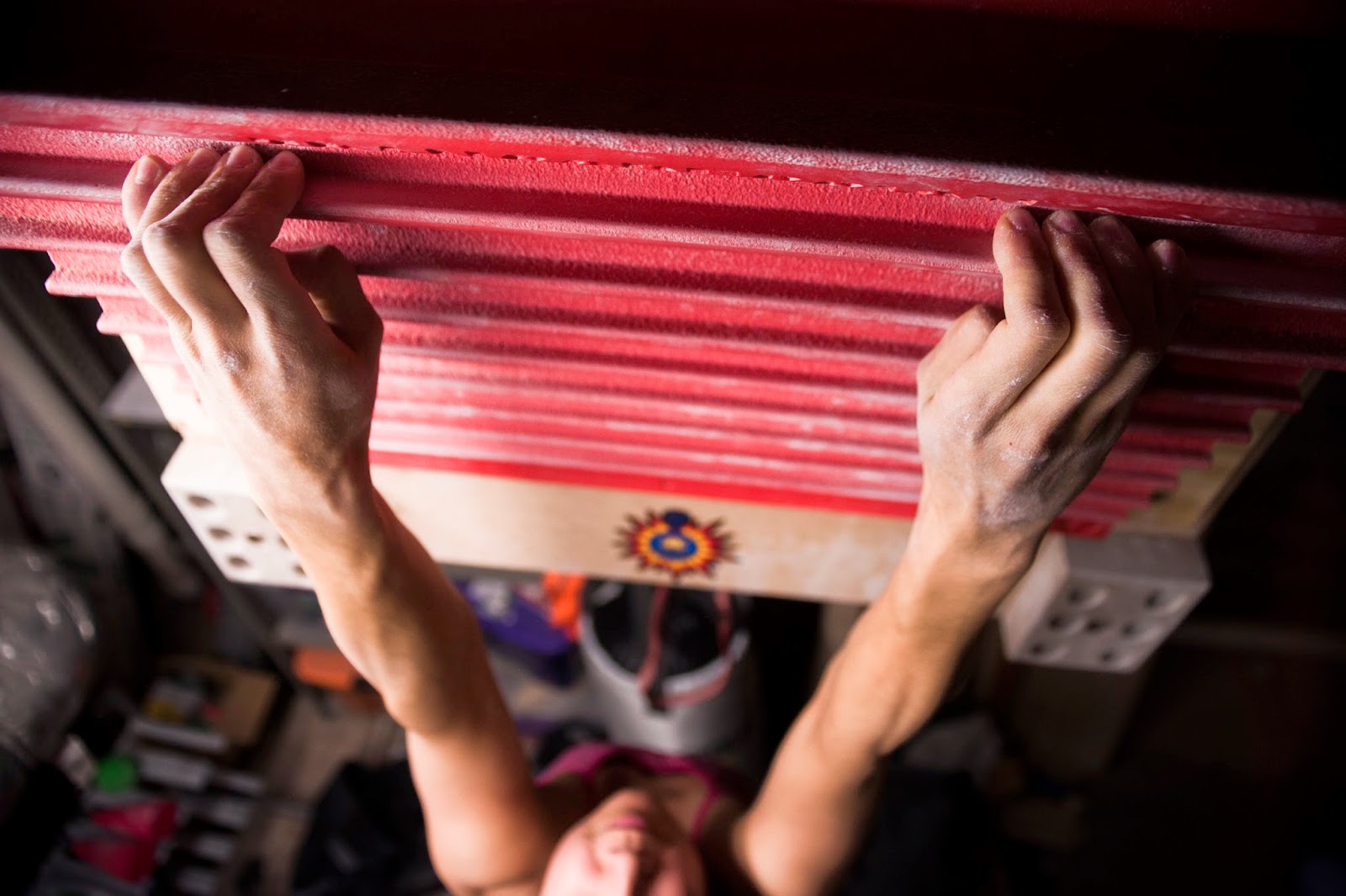 I may be stating the obvious here, but the fact that this board has edges in descending sizes makes training much simpler.  Training, as opposed to just “working out”, relies on ever increasing loads to continually spur adaptation.  With this board, adjusting the training load is easier than ever.  It’s true that adjusting the weight you’re adding has nothing to do with the board, but that approach misses a key component to climbing training… using smaller holds.  This is where Eva’s novel approach comes in. 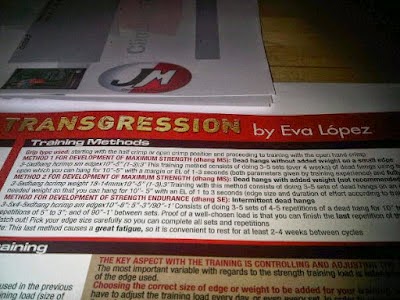 The board comes with a detailed poster that explains Eva’s studied approach to using the Transgression  Her doctoral thesis was researched and written on finger strength training, so I’m inclined to trust her methods.  Inclined enough that even though I was climbing the best I ever had using my own approach, I opted to try Eva’s way for a season.

The poster is so detailed that at first glance it is difficult to understand.  After spending 10 or 15 minutes trying to comprehend the information, it started to become clear, and now makes perfect sense.  To make it even easier, she has very easy to grasp videos posted online HERE.In my first couple of seasons using a hangboard, I saw huge gains.  Since then, gains have slowed first to a trickle, and more recently, to almost imperceptible.  I’m ok with this… I understand that this is a long fight, not a quick battle.  However, after my first season using Eva’s methods, I saw bigger gains than I had in a few years.  The crux hold on my long term project was noticeably easier to hold… so much easier that my body position changed due to being able to “own” that hold so easily (but that’s another story I’ll tell you soon).

I’m not going to completely divulge her methods here, but there are some points I want to make.  This workout fits right into what my own research indicates is the best method to gain strength.  I was nervous to stray too far from the classic “repeater” workout, but Eva’s research gave me the push I needed.  I’m glad that it did.  Also, the time spent hangboarding over the course of a training season is GREATLY reduced, which is a major plus for those of us who are time strapped to begin with. 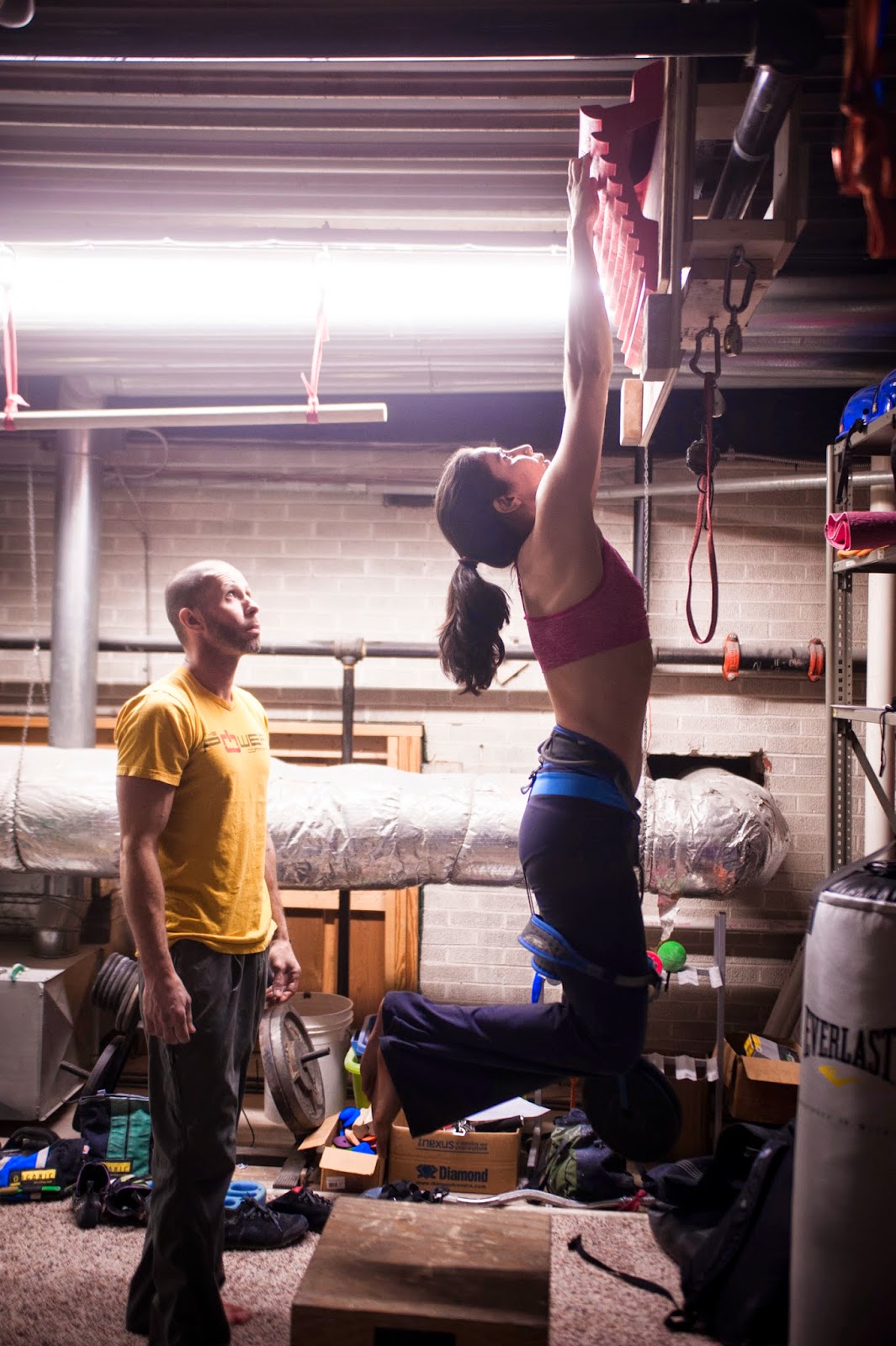 Just last week, I began my second round of hangboarding using Eva’s board and methods.  I’m sold. The one negative I’ve encountered with this board is that it was probably rushed out a little too quickly, which seems to have contributed to the talk of sharp edges and damaged boards.  Not to mention, many in the US have had a hard time finding a board due to distributor issues and exorbitant shipping costs, which I’m told is now fixed. Price is also an issue that many are concerned about, but after using the board for a season, I’ve reconciled with that.  Most boards I’ve used, I’ve outgrown.  This one will last me many seasons, and if you split the price up season to season, it’s more than worth it.  While the steel tendoned among us will need an even smaller edge, the board will still be plenty useful for a large portion of the training. For a gym environment or in a place where the board will be used by a wide variety of climbers, I can’t imagine a better finger training tool than the Transgression and it’s little brother, the Progression.The vitals, so you don’t have to search back through this post: JM Climbing (link no longer available) In the U.S., email usa@jmclimbing.comYou can find Eva’s training videos HERE.

Again, this review was written by Kris Hampton and reposted from his site, powercompanyclimbing.com. Kris Hampton is our friend and the author of our 8-Week Endurance Training Program. He’s also in the middle of creating a hi/low power program for us… stay tuned.